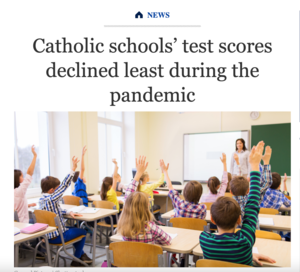 Enrollment is now open for the 2023-2024 school year at Cardinal Newman!

The National Assessment of Educational Progress (NAEP) has released the “Nation’s Report Card,” an analysis of elementary schools’ test scores from across the United States. While the troubling data showed the largest decline in math scores of 4th and 8th graders since the NAEP began their study in 1990, it also found that students of Catholic schools may have fared best through the pandemic.

According to a press release from NAEP, the mathematics and reading scores of 4th and 8th graders declined in all 51 states/districts. In math, 4th graders’ scores were found to have dropped 5 points overall, while 8th graders’ fell by 8. Meanwhile, both grades saw the same three-point decline in reading scores. The 2022 data was compared to the last NAEP analysis in 2019.

In particular, Catholic schools were found to have seen no decline in the math scores of 4th graders, while the same grade saw 5- to 10-point declines in public and charter/non-charter schools. In reading, however, 4th-grade Catholic school students’ scores were found to have declined by 2 points. This is only one point better than public and charter schools and is not statistically significant.

Catholic students in the 8th grade did not do quite as well in mathematics, with scores falling by 5 points, but even this decline was slight compared to the national average. In public schools 8th graders’ scores fell by 8 points and those in charter schools by 9. While the drop of 5 points to Catholic students is significant, so too is the difference between Catholic schools’ scores and the scores of students in public and charter schools.

Eighth grade may have shown the sharpest decline in math scores, but Catholic students really shone in reading, with scores rising by 1 point. It is a tiny change, to be sure, but this is still respectable considering it is the only area in which 4th- or 8th- grade students displayed an increase in their scores. On top of that, 8th-grade reading scores fell by 3 points in both public and charter schools, which puts a 4-point gap between Catholic schools and their counterparts.

In the report, Daniel J. McGrath, acting as NCES associate commissioner for assessment, commented on the NAEP’s findings. He noted that 8th-grade math scores are particularly important to a student’s education:

“Eighth grade is a pivotal moment in students’ mathematics education, as they develop key mathematics skills for further learning and potential careers in mathematics and science. If left unaddressed, this could alter the trajectories and life opportunities of a whole cohort of young people, potentially reducing their abilities to pursue rewarding and productive careers in mathematics, science, and technology.”

McGrath went on to note that students had to grapple with more than just the pandemic in the last two years. He cited instability at home, decreased access to resources, teacher shortages, cyberbullying, and an uptick in violence once schools reopened as factors that could have contributed to falling grades nation-wide.

“Academic recovery cannot simply be about returning to what was ‘normal’ before the pandemic, as the pandemic laid bare an ‘opportunity gap’ that has long existed. It also showed how every student was vulnerable to the pandemic’s disruptions. We do not have a moment to waste.”

See the full report at NAEP.