Another Trophy for the Cardinals 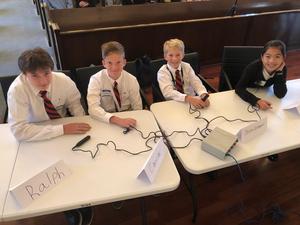 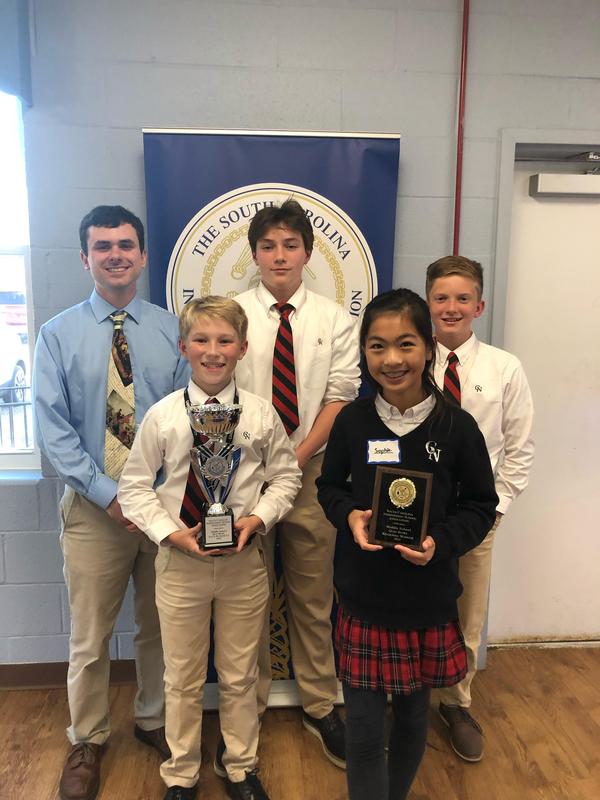 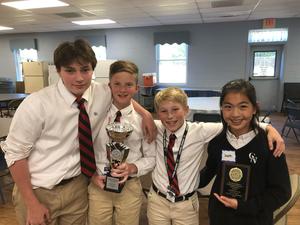 Cardinal Newman middle school quiz bowl team took 2nd Place in the
SCISA State Championship
On October 18th , the Cardinal Newman middle school quiz bowl team took 2nd place in the SCISA State Championship, bringing home a trophy for the second consecutive year. After winning the regional championship by going undefeated in the morning rounds versus Orangeburg Prep and Richard Winn, the Cardinals faced a tough fight against five other top teams in the afternoon.
Mr. Briody has been involved in quiz bowl as a player, staffer, and coach for over 9 years now, and says this string of matches takes the cake as the greatest set of matches he has ever seen.
First up was a match against All Saints’ Episcopal School – a very close one that ended in a tie at 125 points, with the Cardinals earning the victory after a coach’s protest about a Newton’s Second Law question.
Second match was against Augusta Christian School, and was the first of four consecutive matches (3 wins, 1 loss) in which the Cardinals recovered from a great deficit. After a correct buzz from Brock on the last question, the Cardinals squeezed out a win 140-135.
Third match was against University School, and was almost exactly like the previous one. A great recovery by the Cardinals in the second half was marked by another correct Brock buzz on Isaac Newton. Cardinal Newman 140 – University School 130.
In their fourth match, the Cardinals went down early against Trinity Collegiate, the eventual champions, and then mounted yet another late game comeback to keep it close with a final score of Trinity 180, CN 170.
In the fifth and final match, perhaps the best of the day, the Cardinals were losing 95-20 early, and 120-65 at the half. In the second half of the game, the Cardinals scored 160 unanswered points, leading to a 225-120 victory!
But most importantly, Mr. Briody's favorite part about the whole day was that every student contributed a nearly-equal share in the number of correct answers. Oftentimes in quiz bowl, teams excel when they have one student that answers 95% of the questions. This was not the case with the Cardinal Newman team – a rarity in the quiz bowl world today.