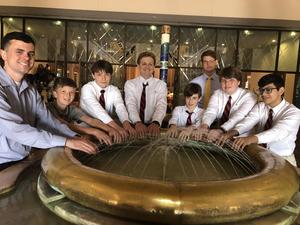 More than 1,200 students were present from 47 states, the District of Columbia, Puerto Rico, and even Poland! This was the first time that any Cardinal Newman students had competed in a “normal” (post-Covid) national tournament, and they did an outstanding job.

After four rounds of competition over two days, Jonah Reisenauer and Jack Seezen made the first round of History Bee playoffs, earning plaques to celebrate their accomplishments.

Jack Seezen was a semifinalist in the National Science Bee, finishing tied for 13th place out of 96 eighth graders and earning himself a second plaque.

While no seventh graders advanced to the playoffs, Coach Briody said of their performance, “I really enjoyed watching everyone compete. There were some good buzzes for every student, and I can only imagine just how much our students will continue to shine as they get older and continue to pursue academic competitions.”

Of course the students had to take advantage of being in Florida, by making a pit stop at Universal Studios on Sunday evening, after attending mass at the Basilica of Mary, Queen of the Universe. Lots of fun was had by all!

In the National History Bowl on Monday, the Cardinals were up against some tough competition. First up was Nysmith B (VA). CN was in the lead from the first question, after a quick buzz from Jack Seezen identifying Henry VIII as the author of the anti-Luther pamphlet Defence of the Seven Sacraments, but lost a tough game 220-180. CN’s second opponent was the eventual fourth place finisher Westminster (GA). While the Cardinals did not achieve victory in this match, they did put up 170 points to Westminster’s 300, which is an excellent total against a significantly more experienced team.

Although Cardinal Newman lost its first playoff match to eventual fifth-place finisher Burleigh Manor Middle School (MD), the team earned many compliments from coaches, spectators, and moderators on its way to a 12th place finish nationally among middle school teams.

Most importantly, these young students have made Cardinal Newman history through their incredible showing. We are so proud of you! Well done!