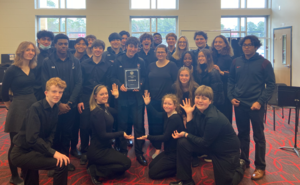 The CN Band is once again making school history!

The Concert Achievement Award is the highest achievement for band programs in South Carolina. Points were earned through the band’s success in Region Band, Concert Performance Assessment performance and the superior ratings received at Solo and Ensemble.

“This award is the culmination of all of the hard work each band member has put into the program.  The time students put in before and after school, the extra efforts of the parents and all of the learning moments from the past years have led to this huge honor,” said Jordan Finley, CN Band Director.

Congratulations to the CN Band and Jordan Finley on this deserved award.

Watch the announcement from SCBDA here!