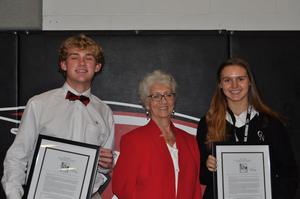 On October 8th, Cardinal Newman School welcomed Bishop Guglielmone to celebrate Mass in honor of the Feast Day of St. John Henry Newman.  The celebration ended with the presentation of the Bobbi Rossi Memorial Fund Scholarship.  John Rider, brother-in-law to Bobbi Rossi, spoke on behalf of the Rossi family and presented the scholarship award to two deserving students:  Connor Flynn and Molly Mazoue.

Columbia was home to Bobbi most of her short life. She attended St. Joseph Catholic School, graduated from Cardinal Newman School in 1982 and excelled her third year in nursing at the University of South Carolina. Bobbi’s sudden death in September 1984 led the Rossi family to establish The Bobbi Rossi Memorial Fund as a way of perpetuating her powerful presence in the community.

Bobbi embodied a harmonious balance of character, heart, faith, and purpose—all of which she orchestrated with vitality and integrity. She was actively involved in student government, athletics and extracurricular organizations while at Cardinal Newman. Upon entering college, Bobbi dedicated her future to healing others via a career in nursing and exemplified sincerity and tenderness in her endeavor. She found that in addition to maintaining a sound emotional and spiritual self, one must also maintain a sound physical self. She believed it was important to honor and respect one’s body and she served as a college physical fitness instructor. Bobbi joined the Kappa Delta sorority while at USC, a group that fittingly hailed her the “Sunshine Girl” for bringing radiance and warmth to everyone she encountered.

Bobbi’s family honors her passion for living – one that was “blazed with spirit, zeal and energy” by awarding the Bobbi Rossi Memorial Scholarship to a Cardinal Newman School senior each year. For 34 consecutive years, The Rossi Foundation has awarded this scholarship to a deserving senior(s), who possesses not only the dedication and spirit of Bobbi but also the desire to touch the lives of his/her classmates and the community. Candidates are nominated by faculty, staff and members of their class during their junior year. Once they are nominated, they must complete an essay explaining how they embody the same spirit and outlook on life as Bobbi. The essays are judged by a panel consisting of members of the Cardinal Newman faculty and staff, the Rossi family, and representatives from The Central Carolina Community Foundation.

“Happiness is found along the way, not at the end of the road,” was written by Bobbi Rossi before her tragic death in 1984.  Cardinal Newman School is extremely grateful to the Rossi Family for their continued generosity, and proud to carry on the legacy and that spirit of joy that Bobbi Rossi has left us.