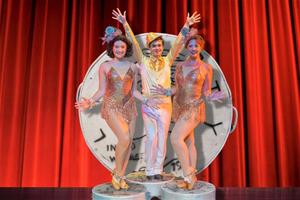 The show will run through September 26th!

Cardinal Newman’s very own Grace Sawicki is currently starring in the historical Town Theater’s production of the popular musical 42nd Street. Grace is showcased in the lead role of Peggy Sawyer where she leads an experienced cast on stage. The story follows Grace’s character, Peggy, as she is thrust into the spotlight of a Broadway show unexpectedly and follows her and the cast and crews adventures as the work to opening night and beyond.

This is Grace’s first lead and third overall role in productions at the Town Theater, where she has also performed in the productions of Into the Woods Jr. and Willy Wonka. We are all proud to see Grace’s hard work pay off! Be sure to get your tickets to attend a performance, tickets can be purchased at the Town Theater website. Break a leg Grace!