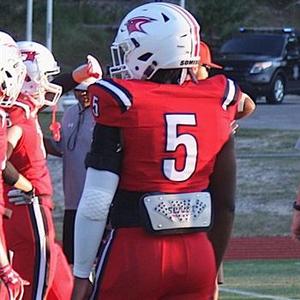 The Cardinal Newman senior football star will continue his athletic career in the upstate this fall.

Cardinal Newman is proud to announce Shanye Monsanto’s commitment to attend North Greenville University where he will play football. He will sign his official letter of intent this Friday, here on campus.

In Shanye's athletic career at Cardinal Newman, he was a multi-sport star, lettering all four years in both football and basketball, as well as 2 years in track and field.

On the gridiron, Shanye was a two-way contributor, a playmaker on both sides of the ball, at running back as well as defensive end. He was selected to be a Captain of the 2020 team by his teammates, which speaks to his character and leadership.

Shanye led the Cardinals in sacks for three of his four years, and was a four-year, first-team, All-State performer at defensive end. He participated in the SCISA All-Star game and the SC Blitz All-Star game in the most recent post season, and was selected to the High School Sports Report All-State Team as well.

We are grateful for Shanye’s contributions to Cardinal Newman as a student, an athlete and a leader and we are excited to see him grow as a college student-athlete at NGU. Congratulations, Shanye! We are so proud of you.