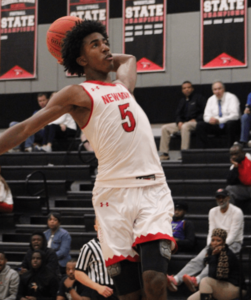 Josh Beadle nominated to the McDonald's All-American Team
Senior Mens Basketball standout, Josh Beadle has been nominated to the 44th Annual McDonald's All-American Basketball Team. If selected, Josh will join the ranks of Michael Jordan, Shaquille O'Neal, Kobe Bryant and other basketball greats who have also received this honor.  This is a once in a lifetime achievement for high school seniors. The final roster of 48 players will be named later this month.
According to the press release sent out by McDonald's, "This year’s nominees are being recognized for the consistent hustle, grind and passion each have brought to the game of basketball over the course of their high school careers."
Josh is one of just six Mens Basketball players in South Carolina to be nominated, and one of only two here in the Midlands. Josh has committed to play basketball at Clemson University next year.